Dr. Gina Weissman is one of the experts in diagnosing and treating various types of tongue ties.

Being both a dentist and an experienced Lactation Consultant, she has a unique perspective and provides parents with information and follow up throughout the process.

Before releasing the tongue:

Some people ask: Why would it be necessary to release the tongue?

We all have a membrane connecting our tongues to the floor of our mouth. A Tongue-Tie (TT) or Ankyloglossia, is when that membrane is too tight, too short, too thick, or too close to the opening of the mouth. This congenital oral anomaly may affect the appearance or function of the infant’s tongue.

During breastfeeding the tongue plays a crucial role. The breast tissue and the nipple are held in the mouth while the tongue covers the lower gums and cups the breast, moving in a wave-like motion.  It pulls upwards and forward in order to compress the breast.

A tongue-tie can sometimes prevent the tongue from covering the lower gums during suckling and thus preventing the complete motion. Therefore, it may cause problems like nipple pain; extended nursing sessions and insufficient milk transferred to the baby, which may reduce the mother’s milk supply.

According to a position paper of the Israeli association of pediatricians, Israel Neonatal Society (2012) the indications for releasing a tongue tie mainly include severe nipple pain while breastfeeding, with or without nipple sores or cracks; frequently repeated disengagement of the nipple from the baby’s mouth while breastfeeding, and slow weight gain in a breastfed baby.

According to the Israel Neonatal Society (2012) Before any case of tongue release breastfeeding consultation is advised. In some cases, professional breastfeeding advice may prevent the need of a surgical intervention. If intervention is necessary, it is recommended to provide it as early as possible so that breastfeeding is not affected. The position paper states that releasing the tongue should not be carried out solely to prevent pronunciation or aesthetic problems.

Several studies show that releasing the tongue reduced breastfeeding pain for most mothers. Furthermore, studies report better milk transfer to the baby and overall extended breastfeeding duration. There is not enough solid scientific evidence to support the influence of tongue-tie on problems of future pronunciation.

So how do we know that the tongue should be released?

Possible signs for recognition (not all of which need to appear):

Many of these signs are part of the challenges many mothers face during breastfeeding, for different reasons, with a normal tongue. Thus, the tongue function as well as breastfeeding should be assessed by a professional in order to decide whether the tongue should be released.

The procedure itself, of tongue release:

A recommendation to release the tongue will be carried out only in when there is a solid medical indication for it, or when there are clear implications on breastfeeding. 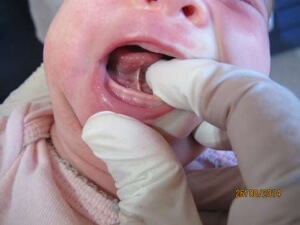 After releasing the tongue

To prevent future infection  – ensure that all hands that touch the baby are thoroughly washed and prevent young siblings from coming in contact with the baby’s mouth.

Recommendations following the tongue release – If the baby is fully breastfeeding: Frequent breastfeeding for the first two days to ensure the baby’s quick adjustment to its “new tongue”.

Please keep us updated during the first 24 hours after the tongue release and let us know how breastfeeding is going.

If the baby was having breastfeeding challenges prior to the tongue release, skilled lactation assistance may be required in order to get breastfeeding back on track.

Stretching Exercises – to prevent the reattachment of the frenulum:  These are done for a week, three times a day. Each time, the parent passes his finger three times under the width of the baby’s tongue, and lifts the baby’s tongue from underneath, at the place of the release, using the forefinger (3 times).

The healing of the incision – in some cases (posterior tongue tie), following the procedure, a white coating (in the shape of a diamond) will appear under the tongue; this is part of the healing process and is not pus. Do not attempt to remove it and continue doing the exercises.

Pain – most babies do not show signs of pain following the procedure of tongue release. If it seems there is need, pain medication such as paracetamol may be given according to directions on the packaging of the medication. It is important to prevent pain (if it appears), in order to enable the exercise of the tongue while nursing and thus quickly improv the movement of the tongue following the release.

Fever – there should not be any fever rise following the procedure, however if the baby’s fever rises, notify the attending physician.

Bleeding – There should not be bleeding following the procedure. However, if there is heavy bleeding, notify us immediately. We will give you instructions. Light bleeding may appear while doing the post-operative exercises may be noted if the baby spits up, or in the baby’s stools, due to the baby swallowing some blood during the procedure.

Wishing you and your baby a quick recovery,

Translated from Hebrew to English by Judy Ronen